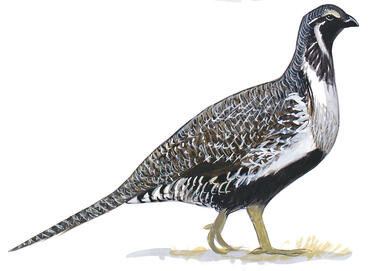 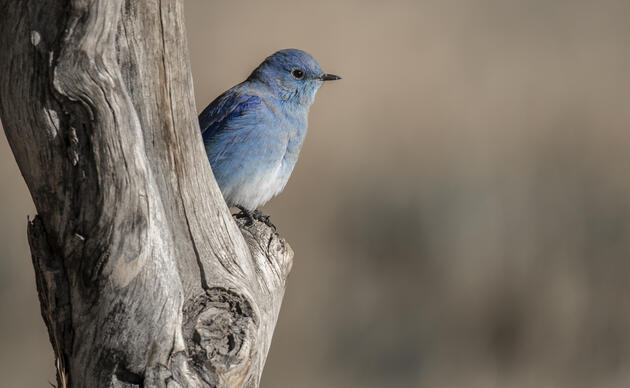 BirdNote published the last episode of its eight-part podcast called “Grouse, the Most Controversial Bird in the West.” We asked producer Ashley Ahearn to tell us about the show and what the Sage-Grouse can tell us about hope, compromise, and life in rural America.

1. You describe the podcast as a show about grouse, the most controversial bird in the West. As Auduboners, we love using birds to tell bigger stories about climate and policy. How did you decide on the grouse to tell your story of hope, compromise, and life in rural America?

Building this story and this series around this controversial bird and what it symbolizes allowed me to explore themes like the urban-rural divide. As a newcomer to sagebrush country, I spend a lot of time with ranchers and other folks who make their living off the land here. I made this series as a way to explore those divisions, but also to learn about a bird that is in a lot of trouble. Its numbers continue to decline, and the wildfires this year, or at least in Washington, did a lot of damage to the remaining population.

2. You interview many different people on how they value grouse and sagelands. One of my favorite quotes was when you asked a cattle rancher what he values more, grouse or cattle, and he said grouse. When you asked him why, he said “You make the journey one time, and you don’t want to do something that ruins it for generations to come.” Did that sentiment come as a surprise?

I think if you had asked me that question three years ago when I was living in Seattle and I was covering the environment for NPR there, yes, that might have been a little bit more of a surprise. But now that I live in ranching country and volunteer to move cows for local ranchers, no, that wasn’t a surprising sentiment. I shared it in the hopes that it would be surprising to listeners who maybe don’t have a lot of opportunities to interact with ranchers and see just how closely they live to the land, how closely they observe the land, and how deeply they feel their role as stewards is in terms of caring for all the creatures that live in sagebrush country.

3. Our country feels more divided than ever, but you found a story of compromise in Eastern Washington. Could you tell us about that?

I think the problem with the way we talk about compromise is that it can be a lot of talk and not a lot of concrete action. If we want to talk about compromise we also need to look at it with a real clear-eyed, questioning mindset that looks for the data to back it up. I do find hope for compromise and shared action in small communities across the West. I live and work closely with ranchers. I volunteer to clear trail, to help fix fence posts, that sort of work that is what land stewardship looks like in real life and keeps people on the land in the hopes that it doesn’t get developed. I think there are always trade-offs in conservation but I’m not willing to give up on the possibility of compromise, I’m just not willing to give it a clean bill of health that it’s accomplishing the outcomes that we need for birds like the Sage-Grouse.

4. Hope is one of the themes of your podcast. Here at the end of 2020, and after a devastating fire season, what fuels your hope?

I actually don’t have a lot of use for the word hope. I think the word that we need now is courage. We are living in the sixth mass extinction and the climate crisis. The fires that burned in Washington state this year alone eliminated, some estimates point to half, of the remaining Sage-Grouse in this state. And similar stories are happening throughout the Sage-Grouse’s range. I think courage is a more valuable mindset and it is a mindset that involves doing the right thing and continuing to fight in the little ways that we all can. Maybe hope for the best but the truth is we just have really hard work to do. We also have some hard questions about adaptation and what can we keep in a world that is changing before our very eyes.

5. The podcast is fascinating but so is your personal story of deciding to move to Eastern Washington to do better environmental journalism. Have you found that to be the case?

I’m a better journalist now than I was in my previous job, I can honestly say that. I think living more closely with people who are managing the land and answering questions about what’s to be done in real time on these landscapes has opened my eyes to the realities and the challenges of this situation. Now I would say that I’m looking more for long conversations and deep conversations. In my next big project that I’m starting in 2021, I’ll be exploring the adoption of holistic and sustainable land management practices among women-run and women-owned ranches across the West. And I’ll be applying those skills that I’ve learned since moving to sagebrush country of deep listening, long visits, and spending time working with people on the land before they start to share their stories and open up about their experiences and their perspectives. I think that is the kind of enriching storytelling that we need right now in this divided country and I hope that it offers some healing and new perspectives for people on all sides of the sagebrush issue.

Please do give the podcast a listen. I would love to hear folks’ thoughts. Thank you so much to BirdNote for making this podcast possible, to the Audubon Society for helping publicize it and get the word out, and also to Boise State Public Radio for distributing the show to NPR member stations around the West through the Mountain West Bureau.

Watch the podcast on BirdNote